Footballer, pundit, and British sports presenter Alex Scott MBE has had a spectacular career in sports, on and off the field. Born to an Irish mother and Jamaican father in Poplar, East London in 1984, Scott’s football aptitude was immediately apparent as a child and remarkably, she signed with Arsenal at age eight.

Scott’s tenure playing for Arsenal lasted until the 2004-2005 season when she then began playing for Birmingham City, only to return to Arsenal one year later. Playing as a right-back, Scott helped Arsenal to numerous victories including a domestic double of the FA Women’s Premier League and the FA Women’s Cup, as well as winning the quadruple in the 2007 season.

Scott’s career eventually took her overseas to the United States to play in what was the new women’s league: Women’s professional Soccer. She initially played for the Chicago Red Stars, then moved to the Boston Breakers, before moving back to the England to play for Arsenal once again in 2012 when the US Women’s Professional Soccer league collapsed.

A Legend in the Sport

Her return to Arsenal saw her named captain for the 2014-15 season. Scott’s playing career came to a close on May 12, 2018 in a game against Manchester City that Arsenal won 2-1. Scott’s career as an athlete has adorned her with merits at a national and international scale. She appeared for England’s national team 140 times and represented Great Britain in the 2012 London Olympics.

She also competed at U19 and U21 levels for England, including at the 2002 FIFA U19 Women’s World Championship in Canada. One year after her retirement from the field, she was inducted into the English Football Hall of Fame.

Scott also launched The Alex Scott Academy in 2012, partnering with Kingston College and Puma. The first academy of its kind in the UK, she wanted to create a system that focused on training, qualifications, and provided players with a first-class athletic and academic experience.

Her leadership beyond the football pitch has been consistent as well. In 2016, she travelled to Iraq to visit a football project that The Arsenal Foundation and Save the Children funded. Providing young people with a safe space to play football, the program fostered a safe environment for people who had been forced to flee their homes, and Scott’s visit looked to inspire young girls to play the sport she excelled at, to connect with them, and make their goals a reality.

Breaking into journalism and media

Throughout her career playing football, she was planting the seeds of her media career that was to follow. Appearing on shows such as Soccer AM and other minor roles appearing on BBC Sport, BT Sport, and Sky Sport, she was getting acclimated to a world that would soon be hers.

After retiring, she dedicated her attention to working full-time TV broadcasting and co-presenting on Match of the Day Kickabout. Scott also had her stints featured on British Reality Game Shows in 2018 including Bear Grylls: Mission Survivor—which she won—and the Sports Relief Strictly Come Dancing Special. She returned to the latter the following year and made it to the quarter finals.

Her television career continued to advance with her abundance of talent, personality, and football expertise. In 2018 she covered the FIFA World Cup and later that summer became the first female pundit on Sky Sports to join the Super Sunday Team.

She later covered the 2019 FIFA Women’s World Cup for the BBC, and that summer was announced to be a new cohost of Sky Sport’s Goals. In December of 2020, she cohosted the 2020 BBC Sports Personality of the Year Awards. 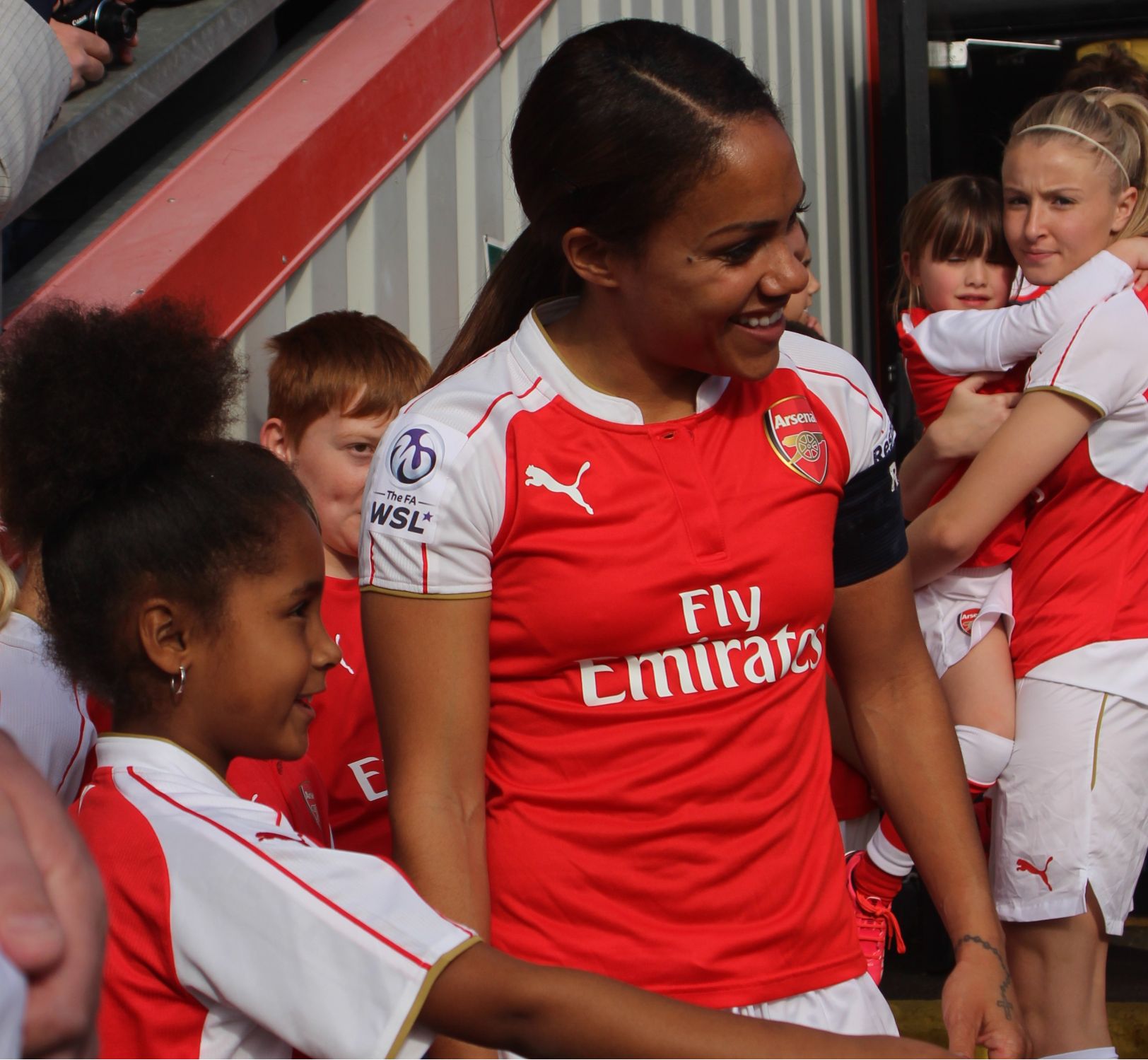 Attribution: “Arsenal Ladies Vs Birmingham” by joshdss CC BY 2.0

This spring, she was announced as the new host of BBC’s Football Focus, distinguishing her as the first permanent female host in the show’s 47-year history. Her role as not only a woman, but a woman of colour on sports TV has been controversial and at times, has made her the target of racist behavior.

Reflecting on her new role on Football Focus, she expressed her gratitude to the BBC, “When I was a kid, I would never have watched television and thought someone like me could be presenting a program like Football Focus. For the BBC to trust me with this role and allow me to be my true, authentic self means a lot.”

Before this career advancement, Scott received derogatory comments back in the autumn of 2020 when there was speculation that she was going to become the new presenter of the BBC’s A Question of Sport. People were belittling the promotion to a ‘box ticking exercise,’ while others unsoundly claimed she had ‘no experience.’

She was not the first black pundit to receive racist abuse as a backlash to a prime presenting job—Micah Richards, the former Manchester City footballer—had a similar experience when he was rumoured to be part of a new panel on Sky Sport’s Soccer Saturday show.

Scott’s response to this treatment was to post a poem on social media that later got featured across social media and on Transport for London’s underground message board:

When the racist remarks re-emerged following her appointment to Football Focus, claiming once again that she is unqualified, Scott addressed this dilemma to the BBC. She foresaw the criticism and did everything in her power to de-legitimize it:

“Towards the end of my footballing career, some were suggesting coaching and management, but I had such a strong passion to take this path. I completed my degree in sports journalism and broadcasting, and countless work experience placements with Sky Sports, Arsenal TV and London Live. This was to ensure that not only I had the correct skills, but so no-one could ever question my place or my merit. I was one of the first female pundits on the BBC and I clearly remember being determined to transcend from being labelled a ‘female pundit’ to ‘pundit’. Besides the statements surrounding my gender or my race, after being part of the BBC family for six years, I want people to see me on TV and think ‘she’s great at what she does’.”

Finally, in May 2021 it was announced that Scott will also be taking over as the host of A Question of Sport, adding yet another major program to her roster. Of course, with all of the athletic achievements, education and experience under her belt, Scott is highly qualified for the position, and is pioneering a new era of sports broadcasting.

Ending her playing career as the second most capped England player across men’s and women’s games, she has achieved remarkable heights in her playing as well.

Scott’s athletic achievements certainly warrant her name in the history books. However, her success off the pitch is what has made her a distinguished cultural figure. Notably, she made the Queen’s New Year’s honors list and was granted an MBE in 2017 for her ‘outstanding contribution to Women’s Football.’ Her contributions to the sport and path-paving in the field of sports journalism and media will inevitably change the landscape for years to come, as she leads a path to opening up doors for other women and people of colour in the field.

To Hear More on Alex’s Story Head to:

Our writers need your support

Your donations help us provide you with new stories every day

You can find out more about which cookies we are using or switch them off in settings.

This website uses cookies so that we can provide you with the best user experience possible. Cookie information is stored in your browser and performs functions such as recognising you when you return to our website and helping our team to understand which sections of the website you find most interesting and useful.

Strictly Necessary Cookie should be enabled at all times so that we can save your preferences for cookie settings.

If you disable this cookie, we will not be able to save your preferences. This means that every time you visit this website you will need to enable or disable cookies again.

This website uses Google Analytics to collect anonymous information such as the number of visitors to the site, and the most popular pages. We cannot and will not store personal information (such as your name) using these cookies.

Please enable Strictly Necessary Cookies first so that we can save your preferences!

For more information regarding the way we process your information, you can contact us at info@theinclusionpost.com